It's not just a good idea,
it ought to be the law.

I think many have seen this image already: 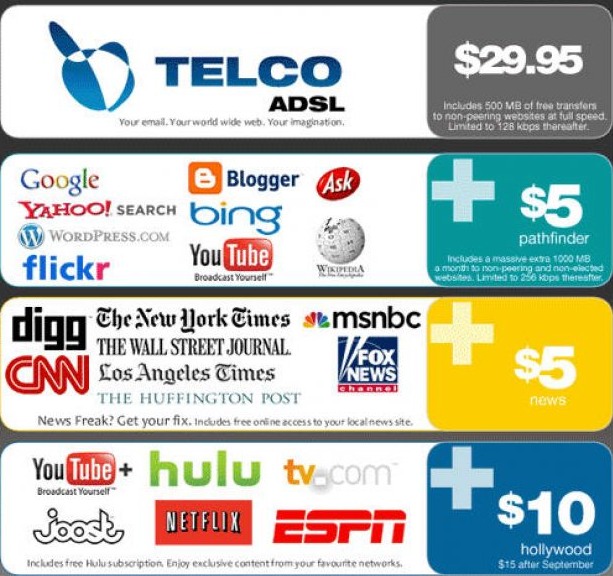 And it certainly could be reality in a few years. It's not even hard to imagine how: One day an ISP starts charging only half the price for their services, except they block Netflix and all ports besides 80 and 443 (which are used for http and https, respectively). This severely limits the ability to do filesharing, use VPN services or watch Netflix instead of plain-old TV.

Since this is fairly reasonable to many people (not everyone uses Netflix), lots of people will switch and many ISPs will need to start offering the same kind of deals. Almost overnight, the ISP landscape could be turned upside down. After that it's not long before most ISPs gave in and for "only 25% extra" you can get access to more services.

The tech community will cry out, but do you think you'll stop your mother-in-law from paying half the price for, in her case, the same service? I don't think so. Even you might switch; we're talking about huge price cuts after all.


Many already knew the idea of ISPs charging you more to access certain websites, but what I really wanted to talk about is the kind of violation that already takes place, but which much fewer people know about.

In this model the ISPs throttle content providers (such as Netflix) so their streams become slow and perform poorly. Consumers will of course blame Netflix, because other websites work fine. It's also not as easy to prove that this is happening since the ISPs can just blame it on a dozen other factors. Unlike where ISPs advertise with "Get access to 2000 sites for only €X", you don't know up front, and you only notice it if you use the ISP yourself.

If an ISP does this, consumers will start using competing services instead of Netflix (perhaps plain-old TV, which just happens to be another service the ISP provides), and Netflix goes like "SHIT, WHAT DO WE DO". Then the ISP comes along and says quietly: "pay us"

Since Netflix only makes money if people subscribe, it's hardly a choice. They will need to pay the ISP or they will lose even more money.

This happened with Comcast in America. They throttled Netflix and then told them "pay us". After a few months, Netflix saw no other option but to pay them.

Right now there is a multi-year contract between Netflix and Comcast in which Netflix pays Comcast. Saturday we learned that Ziggo, a Dutch ISP, wants to do the same.

Except in the Netherlands we have a net neutrality law and Ziggo has to be very careful about this. So what do they do? They don't throttle Netflix, they tell them they will get "first class access" to the Ziggo network. So basically they became mafia: "pay us and we'll ensure your streams won't suddenly perform poorly". In their own words: guaranteed network quality ("gegarandeerde netwerkkwaliteit").

Ask my mother: she won't know that Ziggo just said this to Netflix, whereas when she needs to pay more to access Netflix, she would have known.

So this second type of violating net neutrality is sneakier and at least equally effective, especially since in this case the ISPs are threatening the ones that actually have money and a huge incentive to pay: the content providers. Not all consumers would be able to pay or think it's worth it.

What do we do?


A. Build laws against this. But this won't happen unless we do something.

B. Boycott ISPs that do this. (You block websites? Websites block you!)


I've been thinking about blocking Comcast from reading this website and any of the websites I manage, but I'm so far down the Alexa ranking that it won't have a big impact. It will only work if big websites do this, like Wikipedia and Reddit with the SOPA strike. And I think net neutrality is as important as SOPA.

While I was still contemplating this, Ziggo came along and starts doing something similar. Now I'll happily block Ziggo too, even though they serve a big portion of the visitors to my website, but people that have hosting at my server would not be too happy if sales dropped by the same amount.


Net neutrality will be violated if we do not make ourselves extremely clear. A few years ago KPN (another Dutch ISP) already blocked certain services on their mobile network and offered a premium service to check the weather on buienradar.mobi. Do you know why they stopped? Because it was far too obvious to consumers. It was so public that the media talked about it, and that was part of the motivation behind creating the Dutch net neutrality law.

Luckily for them, by charging content providers instead, ISPs don't need to make it obvious to consumers and it is much less likely to be outlawed.

Net neutrality violations, or tiered Internet access, won't come in the packages you see in the image above. It probably won't be made so obvious to us. They will backstab us without us knowing. But why is it backstabbing? Well, who does Netflix charge more if network access costs them more? Hint: it's you. Cheaper ISPs don't mean cheaper Internet services.

Besides, ISPs should not decide which services we should be allowed to use. I think we have governments and judges for that. Trias politica.

I think if we organize something similar to the SOPA strike, where sites like Wikipedia and Reddit take a stand against sneakily thwarting Internet access, we may be able to wake up legislators and implement actual net neutrality laws. Remember that the vast majority of ISPs oppose net neutrality and that they will be lobbying their best to prevent such laws.


What do you think?

Should I block ISPs that block websites?


Note: I do not personally use Netflix nor Comcast nor Ziggo. I name Netflix all the time because they happen to be the first to be targeted by this, presumably because they use a subscription fee instead of ads (which makes their business much more profitable and a good place to get money from). If this had been about YouTube or any other site, the post would have been the same.